A Round of Applause for Our Bravo! Junior Winner 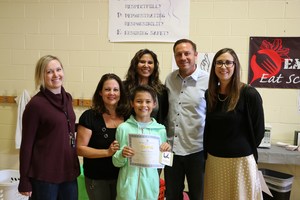 This week's Bravo! Junior award goes to Florida Mesa Elementary 5th grade student Nathan Mosher. He was nominated by Florida Mesa teacher Beth Lohr and interventionist Shawna Clark.
In their nomination they wrote, "We would like to nominate Nathan Mosher for the Jr. Bravo award. This summer we have been devastated by a variety of extreme weather conditions. Rather than simply saying that he wishes he could do something, Nathan took action. Along with his father, Nathan went to Dallas to support relief efforts in the area. Before he left, he ensured that his teacher and I were aware of where he was going and why (he didn't want to miss out on peer mediation training). He is also a part of an initiative to help other students at the school solve problems. Being a humble young man, he didn't tell everyone. Although he did not do this for the recognition, I feel he deserves to be honored for his humanitarian efforts."
As a Bravo! Junior award recipient, Nathan was entered in a drawing for a $25 gift certificate to Maria's Bookshop.
Published September 28, 2017 Print