A Round of Applause for Our September Bravo! Award Winners 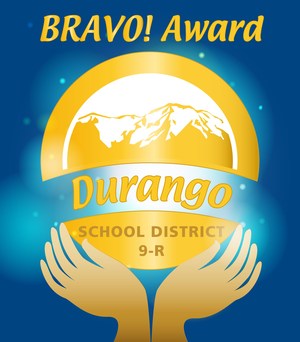 Each week, Durango 9-R recognizes an employee that has gone above and beyond expectations to serve a child, a family, their school/department or their peers. This month we recognized Big Picture High School advisors Chris Calagias and Chantey Webbe, Fort Lewis Mesa Elementary resource teacher Savannah Styers, and bus driver David Monie.
All Bravo! Award recipients are entered into a drawing for a $100 gift card to the Ore House. One gift certificate is given out each month. Bravo! Award nominators are eligible for a monthly drawing for a $25 gift card to Zia Taqueria. Thank you to the Ore House and Zia Taqueria for donating these fantastic prizes!
Published September 27, 2017 Print