Mustangs Start the Year Off Right by Riding the Mesa 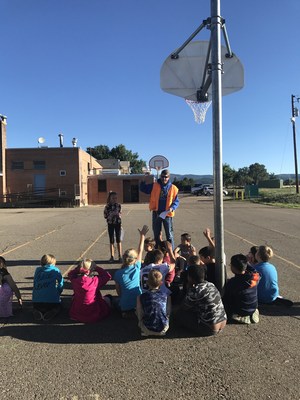 Florida Mesa Elementary's Trail Ride event teaches students how to be safe, responsible, and respectful at school in a fun and engaging way. Mustangs on the Trail Ride visit locations around the school where teachers and student ambassadors model positive behaviors.
"As a Positive Behavior Intervention & Support (PBIS) school we believe that it is important to teach students our core values and practice expected behaviors in the common locations of our campus," said Principal Vanessa Fisher.
On the playground, student ambassador Dylan Mohar Rodriquez reviewed the rules for playground equipment and recess games. He also reminded students to include others, saying "If you see someone standing by themselves, invite them to play with you."
At each location there was a focus on how to treat others, like thanking the staff in the cafeteria or saying hi and giving a friendly wave when passing someone in the hallway.
Florida Mesa reinforces and encourages positive behaviors taught during the Trail Ride by recognizing students with a "Ticket to RIDE" which enters them in a drawing to receive a school-wide recognition and a small prize or incentive. The "Golden Mustang" award goes to students who go above and beyond in exhibiting positive behaviors. Winners of the "Golden Mustang" receive an invitation to the monthly Principal Pride Luncheon, a certificate, and a mustang pin. This year's Trail Ride student ambassadors were all celebrated with "Golden Mustang" awards for being positive role models for other students.
The school's proactive take on teaching, modeling, and practicing expected behaviors has lead to a 60% decrease in behavior referrals.
Go Mustangs!
See more photos from the Trail Ride on our facebook page.
Published August 29, 2017 Print